Wherever and whatever that might be for you. You are going to love this session, it does snowball your determination.  If you want to get more determined about anything, this is for you.

*INSTANT DELIVERY – NOTE: A pdf is delivered immediately after purchase which contains instructions for getting the audio MP3 downloads for immediate delivery worldwide 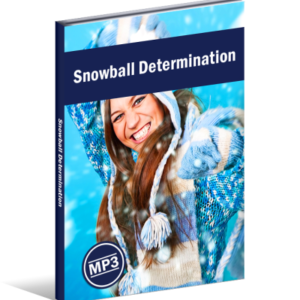 Here in the UK, despite being a relatively small country (compared to places like the US, China and Russia anyhow) we have a wide variance of weather conditions, and we discuss it greatly and enthusiastically.

Yes indeed, up in Scotland and some Northern parts of the UK, they have a lot of snow while we get sunny days here on the south coast of England.

We do go crazy and get excited when it does snow, but we do not get as much of it as many other parts of the country each year. I was hoping to use the fact that Eskimos have hundreds of words for snow in the copy here. Some serious research and googling highlighted the fact that this was a myth that I had fallen for and believed for several years.

Why did I not apply some modicum of critical thinking to such a myth?

Despite this setback, snow is a useful metaphor for my purposes with this hypnosis track. Snow does come in all shapes and sizes, even if there are not Inuit words for every single kind.

At the time of putting this track together, the intrepid fundraiser and TV’s Blue Peter presenter (here on UK TV) Helen Skelton has been travelling across the South Pole raising funds for Sport Relief with another heroic challenge. The reason I mention this is because, in a recent interview that I heard her doing from the South Pole, she said it was tough to ski as they had been for a while as the area was so dry and the snow was like cold powder that they could get no purchase on as they skied upon it.

We know that stuff, don’t we?

The stuff that falls that needs to packed together tightly in a gloved hand to form a proper snowball that we throw at someone with any force rather than it turning to a sort of dust in the air as it is launched.

So then, snow is going to be the metaphor and the basis for this hypnosis track here is aimed at developing determination.

People often refer to an occurrence or phenomena that ‘snow balls’ when it gathers momentum. The sort of imagery gets used on TV that shows how snowballs can start tiny and then become such a force as they roll down the hill, that they blast away all obstacles.

Determination tends to be more about having a sense of purpose and providing a solution for an outcome of some kind. Whereas motivation tends to be the fuel that mobilises us towards something more natural.

I always think of determination as having slightly more teeth gritted when it happens. It is a lot more conscious and purposefully driven. Sometimes it is a means to end whereas motivation sometimes tends to be considered a more enjoyable experience.

Wherever and whatever that might be for you. You are going to love this session, it does snowball your determination.

If you want to get more determined about anything, this is for you.